From the Ragdoll menu, select the Import Physics option in the Animation sub-menu.

Animators can now setup physics one character, export it, and then import onto another.

The usecase is having spent time setting up a perfect ragdoll and then wanting to reuse this setup across multiple scenes, on multiple instances of the same referenced character, or on characters with similar naming scheme and anatomy. It can also be used to import parts of a character or individual objects.

Here's an 18 second run-down of the complete workflow, from authoring to import.

Anything you can apply physics to can be exported.

The nodes onto which physics is imported..

It will not remember..

And that's about it! It doesn't even have to be a "character", any combination of Maya nodes you can apply physics to can have their physics exported. Like a (rag)car, or just a (rag)box.

Use the UI to visualise the contents of an exported .rag file and customise the import. 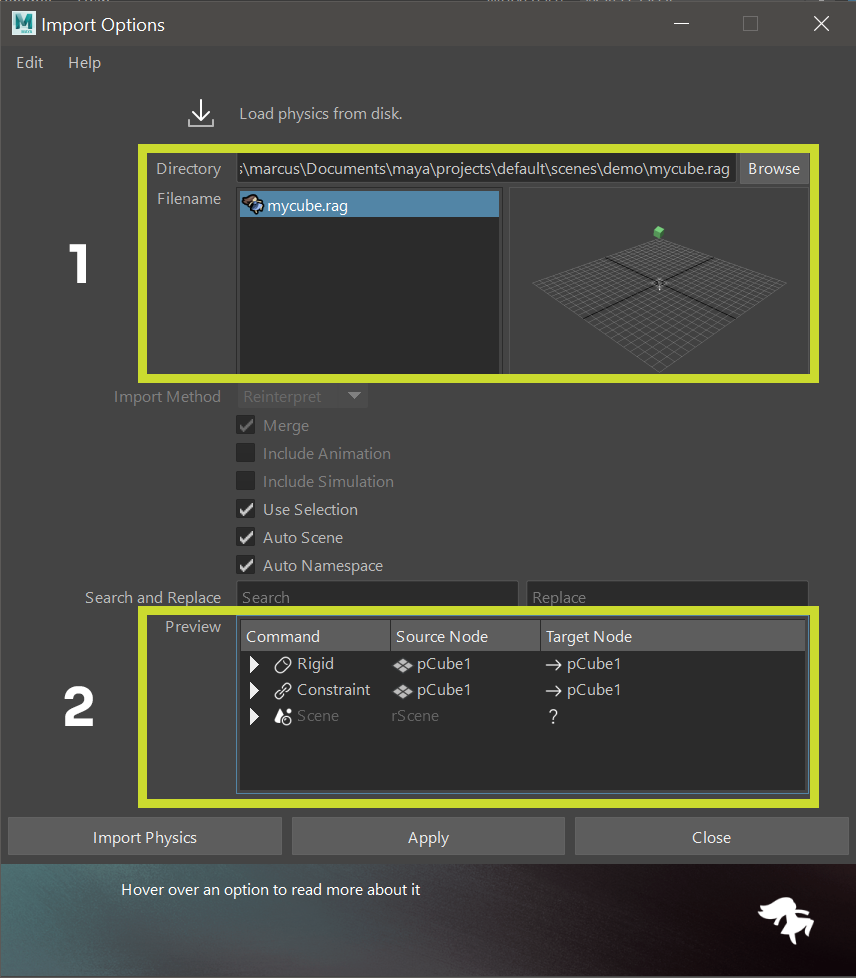 The top part displays other Ragdoll scene (.rag) files in the same directory as the selected file, along with the thumbnail stored during the time of export. The thumbnail currently isn't visible during export, it is captured from the currently active viewport. An Export UI with thumbnail preview (and more!) will be added in a future release.

This sections shows you the contents of the physics scene, ahead of actually importing it.

It will visualise a number of things.

The export-format is identical to what game developers use to author physics in Maya and import it into their game engine. It contains all data managed by Ragdoll, in full detail. Enough detail to reverse-engineer it back into a Maya scene, which is exactly what's going on here.

It means some information is lost, in particular any custom connections made or custom attributes added or removed. It will use the same menu items you used to author a ragdoll, and nothing else. So things not possible with those commands will not be captured in the exported file format.

Each export captures the currently active 3d viewport for use as a thumbnail. So, whenever you export, remember to smile and wave! :D

The visualisations will update as you select different nodes and edit the various options in the UI.

To illustrate this, let's import onto the same scene we exported.

Only one character is physicalised and exported.

Notice that importing is not possible, since the character is already physicalised. Unless we replace the namespace, by selecting another character.

Import onto selected nodes with Use Selection toggled (it's the default).

Every node is stored along with its full path, such as..

And in most cases can get quite long, with one or more namespaces and tens to hundreds of levels deep in hierarchy.

Here, the namespace is simply _:

The Search and Replace boxes of the UI can be used to replace parts of each path, to try and map the original path to whatever path is currently available in the scene.

One challenge with export/import it remapping names from the original scene onto your new scene. Ragdoll solves the typical case of only the namespace being different with "Auto Namespace".

"Auto Namespace" will replace any namespace in the original file with whatever namespace is currently selected. Neat! If there are multiple namespaces, it'll use the last namespace.

For example, if your one character has 3 physics scenes - one for the right arm, one for the left and a single one for both legs - then "Auto Scene" will preserve these scenes for you.

Using more than one scene can improve performance significantly, as Ragdoll will parallelise each invidual scene. The caveat is that rigids in different scenes cannot interact with each other.

Here's a quick way you can use this feature to "clean" a physics scene.

The resulting scene will be "clean" in that it will have been broken down into its componens and reassembled again, not taking into account anything Ragdoll doesn't know about.

(I may just add a menu item for this, called Clean to do this in one go :)

Anything the UI can do can be done via Python, using the new dump.Loader object.

Consider this a version 0.1 of the API, it will likely change in the future.