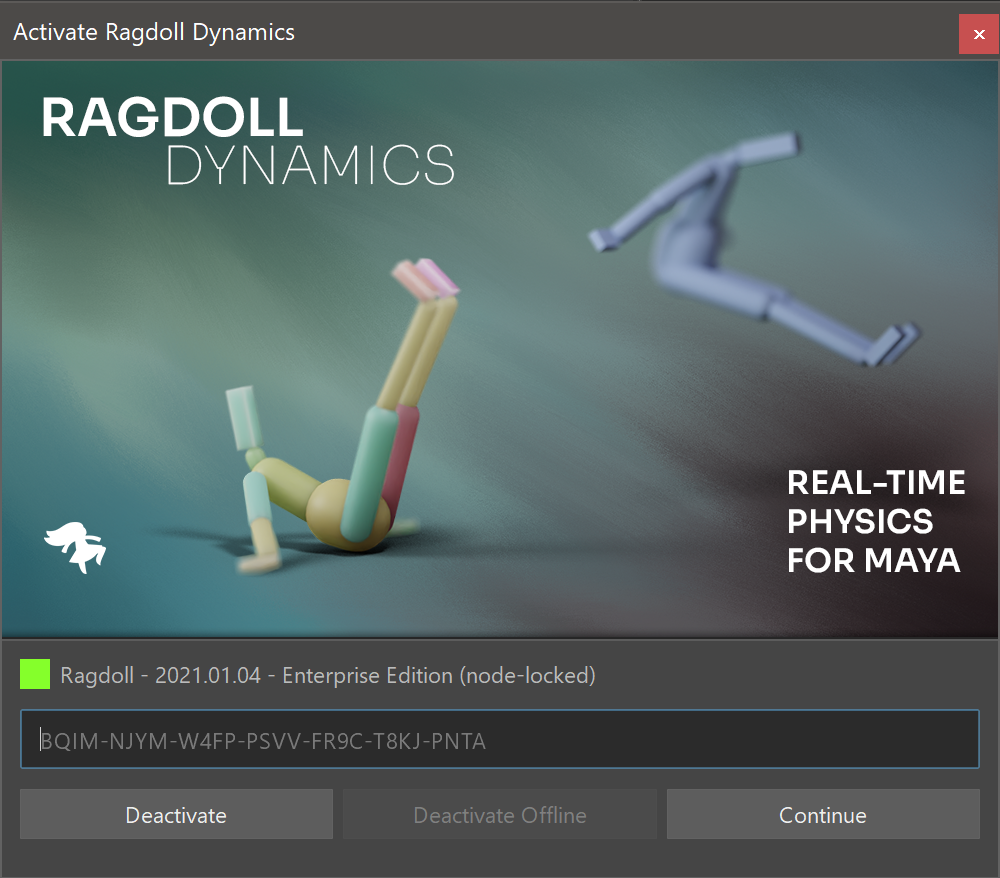 Once activated without a Product Key, Ragdoll enters "Apprentice Mode", and is limited to the following.

See the Ragdoll EULA for details.

On first launch, Ragdoll will try and connect to the Ragdoll Licence Server and register your trial version. This version is node-locked to the particular machine you are on.

Once you've acquired a product key, you can either:

Or if you prefer:

What happens when my trial expires?

Any rdScene.enabled attribute will be set to False.

Scenes will still load just fine and nothing else in your scene is affected. Once activated, the .enabled attribute will return to normal.

Can I renew my trial licence?

Possibly. Reach out to us if this is relevant to you.

Can I open scenes made with the trial version in the commercial version?

Can I use my licence on more than one machine?

One licence, one machine.

Ragdoll is licenced per simultaneous use, so for use on two or more machines in parallel you will need 2 licences - a.k.a. "seats".

When purchasing multiple seats, you may receive a single serial number containing all seats. For floating licences, you'd host a single licence server using this serial to accommodate each machine. For node-locked licences, you'd activate each individual machine using the same serial.

Can I move a licence between two machines?

For node-locked licences, you can hit the Deactivate button (which is same as the Activate button once you've activated) and the serial may be used to activate another machine.

Floating licences are dynamically activated on any machine requesting a licence from your centralised licence server.

Do I need an internet connection to use Ragdoll?

Activation can happen either offline or online, online happening from within Maya at the click of a button and offline being a 4-step process, see below.

How do I use my floating licence?

Whenever Ragdoll is loaded from Maya, it connects to your licence server in order to "lease" a licence. If you own 10 licences, then one of them will remain leased until the plug-in is unloaded from Maya.

Can I activate offline?

When exactly is internet required?

A connection is made in one of two separate occasions.

install() is typically called when the plug-in is loaded and menu is installed.

That is, Maya can open a scene with Ragdoll in it without making a connection to the internet if neither of these things happen. This means you can simulate on one machine, bake or otherwise disable the solver and send it off to a farm (e.g. local or cloud) without worrying about licences.

The alternative would be having to erase any trace of Ragdoll from a scene which would be such a pain.

Can I manage my licence via Python?

Sure can, see below.

Lifetime licences may be activated offline.

Once you press Deactivate, then from Maya's perspective your licence will be deactivated. However, the licence server will not know of your deactivation until you paste the request into online deactivation page.

This means that it is possible to deactivate a licence but forget to tell the licence server about it, which means you will not be able to reactivate it elsewhere.

If this happens, reach out to support@ragdolldynamics.com and we may manually deactivate it for you.