Highlight for this release is No Limits and Greater Performance!

Here's the absolute quickest way to turn a fresh mesh into a full ragdoll.

And here's a more practical example of using this feature to clean up a bad mocap clip.

It'll endure changes to the environment too, with little to no modification of the physics settings or the original animation.

It used to be the case that if your character had a non-default Rotate Order, or a tweaked Rotate Pivot or maybe made use of the handy Rotate Axis or the joints you were using had a non-zero Joint Orient, then you were out of luck! Ragdoll just couldn't handle those. It would aggressively reset those to their defaults, or flat-out refuse to work.

This release adds support for these missing members, which just so happens to be the very last major limitations of Ragdoll when used with your everyday character rigs!

This release introduces support for both the .rotatePivot and rotatePivotTranslate attributes, letting you do things like..

I've also added an option to actually use the rotate pivot (for greater good?) such that you can do this. 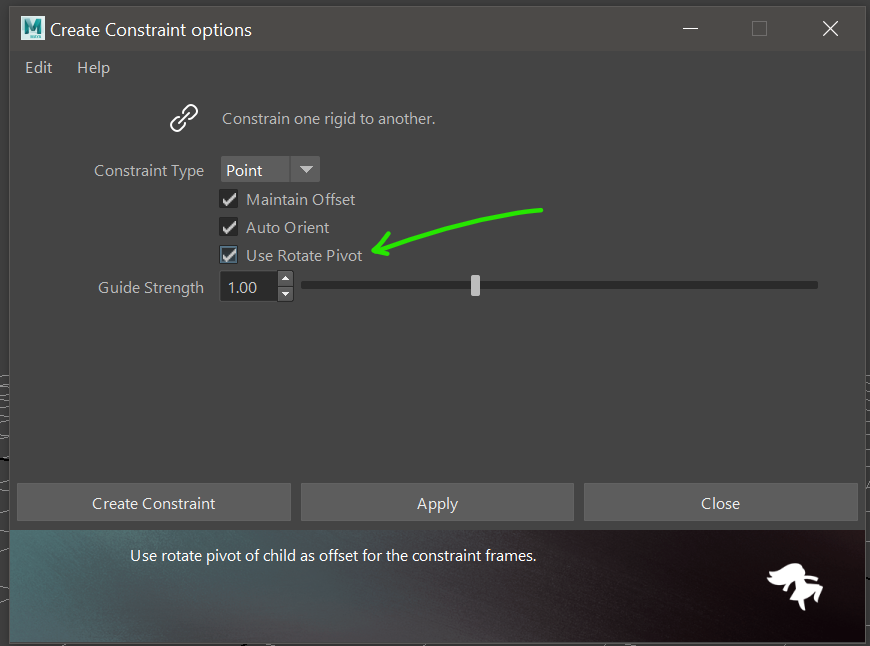 The advanced rigger will know of his lesser-known feature of Maya transform nodes, with the ability to modify the axis around which the Rotate XYZ channels operate.

Finally cracked this one, it has been far too long and is a far-too used feature of Maya transform nodes to not support. But it's done! You should now be able to pick any rotate order and experience no flipping or issue of any kind. Don't even bother getting in touch if you do, because I will not believe you. xD

This tiger (courtesy of www.cgspectrum.com) has a different rotate order on nearly every control.

Hold on a second!

That final flip of the spine is coming from the rig itself, the joints driven by the controllers we're simulating. Ragdoll isn't the only one having issues with flipping. :)

When simulating joints, it can be important to retain the original jointOrient values. Especially if those joints are later used for IK or if you want or need to zero out those rotate values. But it is perhaps most important for an already-animated skeleton, like what you get out of motion capture.

Some motion capture libraries, like Rokoku, do a good job not having any jointOrient in which case they would already work well with Ragdoll. But for animated skeletons with a non-default jointOrient you would have been out of luck..

Rendering is one of two areas where Ragdoll spends time computing (the other being simulating), and rendering performance has been improved by 400%, making Ragdoll 30% faster overall!

Here you can see the improvement up-close, notice how much time was spent simulating versus rendering each frame in the previous version; almost half the time was spent just rendering! 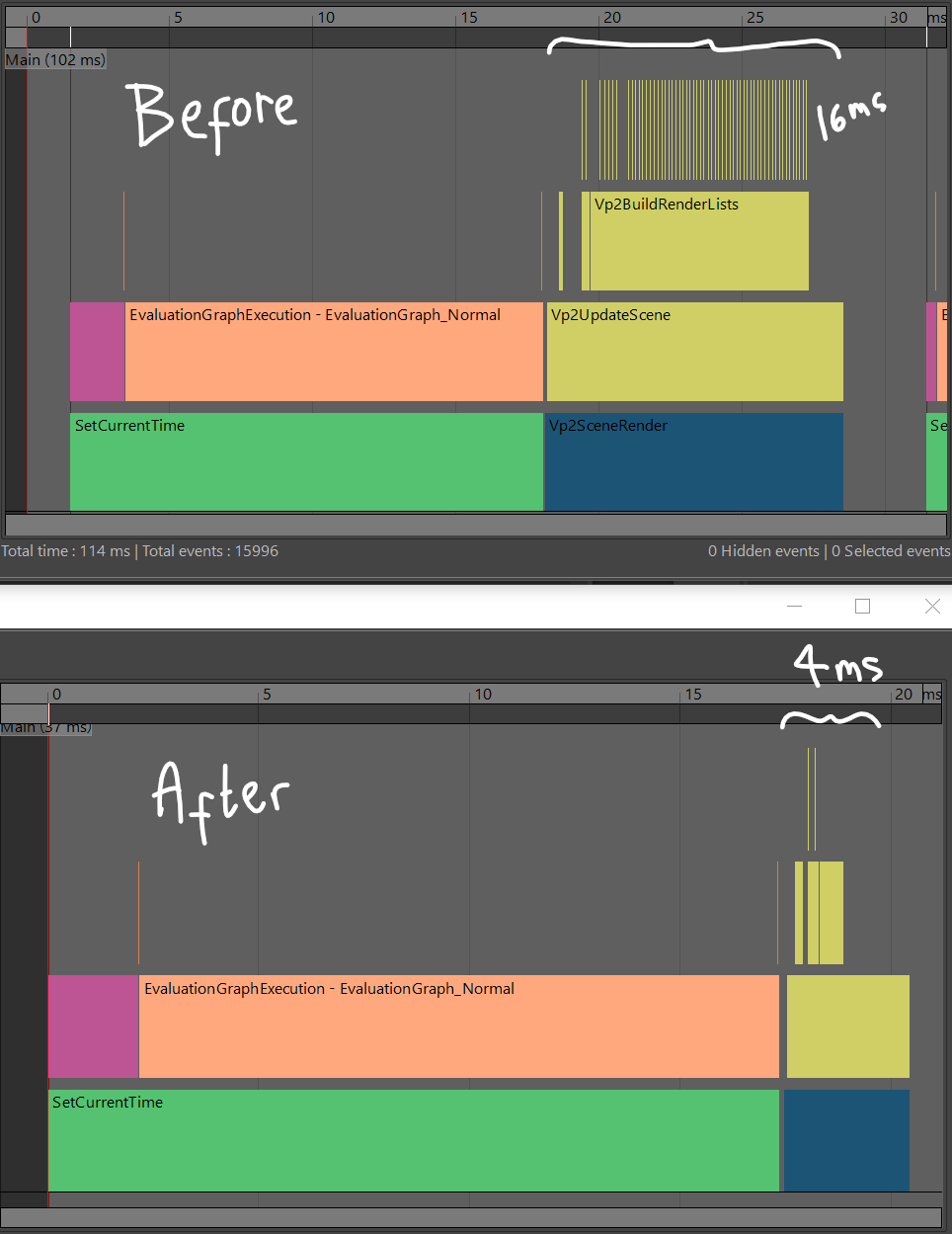 And if you're wondering...

Ok, but what features did you remove?

On the contrary! Rendering now includes..

If 4 ms just to render is too much to ask, you'll get even more of a performance jolt by simply hiding anything Ragdoll related, in particular the rdRigid and rdConstraint nodes. The simulated result is independent of whether or not it is visible in the viewport.

If you are a rigger, this can be handy for your animators once you've finished setting things up, as they may not benefit from seeing these things anyway and could use all of the performance you can give.

Whenever you make a new chain, an attribute is created on the root of that chain to control whether or not the chain should be Simulated or animated.

With this release, Simulated = Off means:

Additions to the physics solver can only happen on the start frame, and if you in previous version created anything on any other frame Ragdoll would yell at you.

This release aids in this process, in that rather then telling you you are wrong, it helps you make it right by automatically returning to the start frame when necessary. 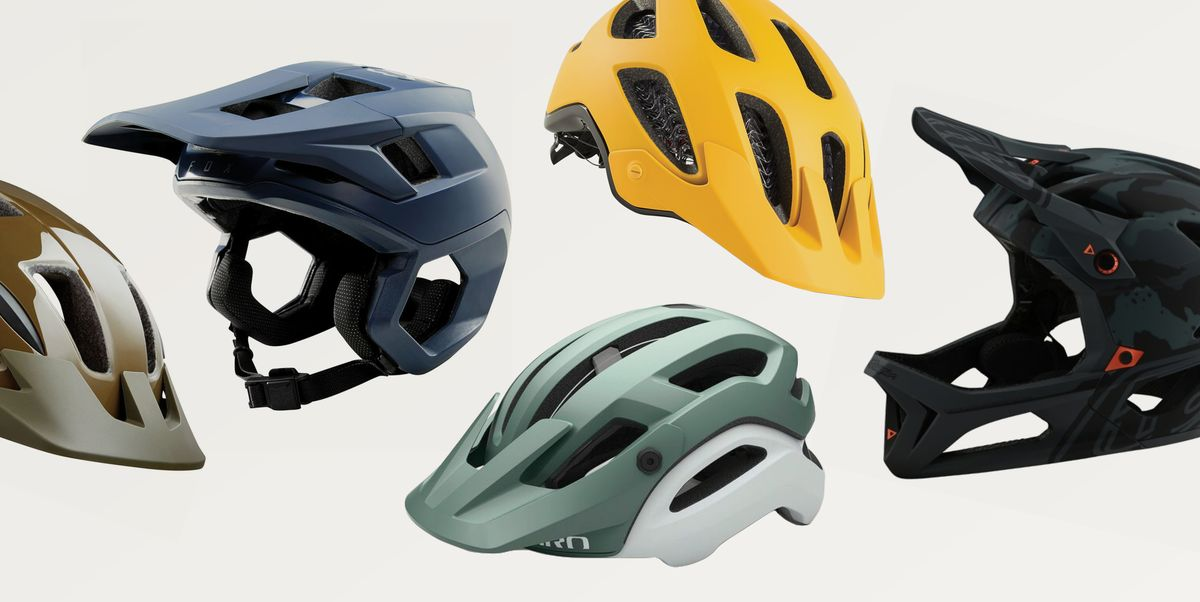 Cycle warnings are generally bad but especially bad for Ragdoll. Understanding when they happen and where they come from can be difficult, especially in complex setups.

Notice how making a passive rigid here would have resulted in it becoming a child of an otherwise active hierarchy. That would have been bad!

These commands will try and protect your from cycles.

All other commands is already safe to use and shouldn't cause any cycles.

These are some of the things you might want to learn more about.

Have more fun with more control. 😘

Soft pins are nothing more than a constraint with a guide position towards the newly created transform.

In the the previous releases I've been experimenting with the idea of turning the Maya translate/rotate channels directly into a guide constraint.

There are three possible scenarios with subtle differences.

In the above, the parent of the newly created rigid with an animation constraint is non-dynamic, it's got nothing to do with Ragdoll. Just your everyday (boring) Maya transform. In this case, the channel is successfully converted to a worldspace position and orientation from your translate/rotate channels.

Here on the other hand, the immediate parent is a Passive Rigid which is a little more flexible, and gives you an option to actually collide with the parent.

Finally, the parent is active. This is also OK and quite fun. Now the new rigid will affect the parent, since it adds weight onto it. Like a backback.

Here's where things get less predictable. If the parent of the control you want physics to follow along with your translate/rotate channels is non-dynamic, but one or more of its parent are active rigids, then the channel box values no longer align.

Making a new character now includes a default multiplier for all constraints (just like chains do!), meaning you can more easily create effects like this!

Two issues were found with the importer introduced in the last version.

When importing a passive rigid, odds are it got imported as a active rigid instead. This could get very messy, as it could end up creating passive rigids as children of active ones, which could reak all kinds of havoc, including cycle warnings.

Any "chain" with more than one child (head) is a special case of each chain only having 1 rigid each, as opposed to longer chains like arms and legs. Now these can be imported too!

This and the above import fix were only related to importing of physics, both your existing Maya scenes and exported .rag files are unchanged and were already in good condition. Yay!

Whenever you make a rigid or chain, some attributes are forwarded onto your animation controls. These attributes are called "User Attributes" and the previous release changed these from Maya proxy-attributes to plain-attributes. 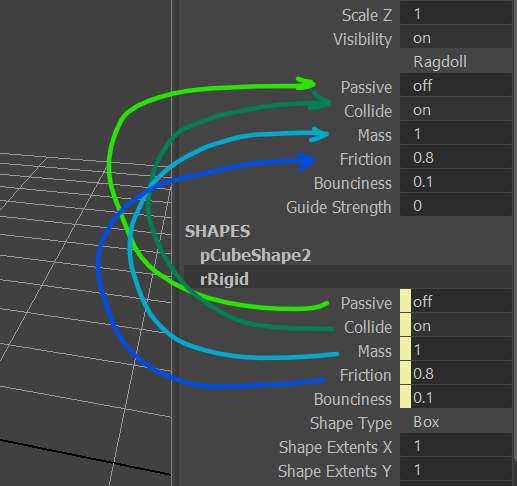 In doing so, they lost their nice names and default values. :( This has now been fixed! 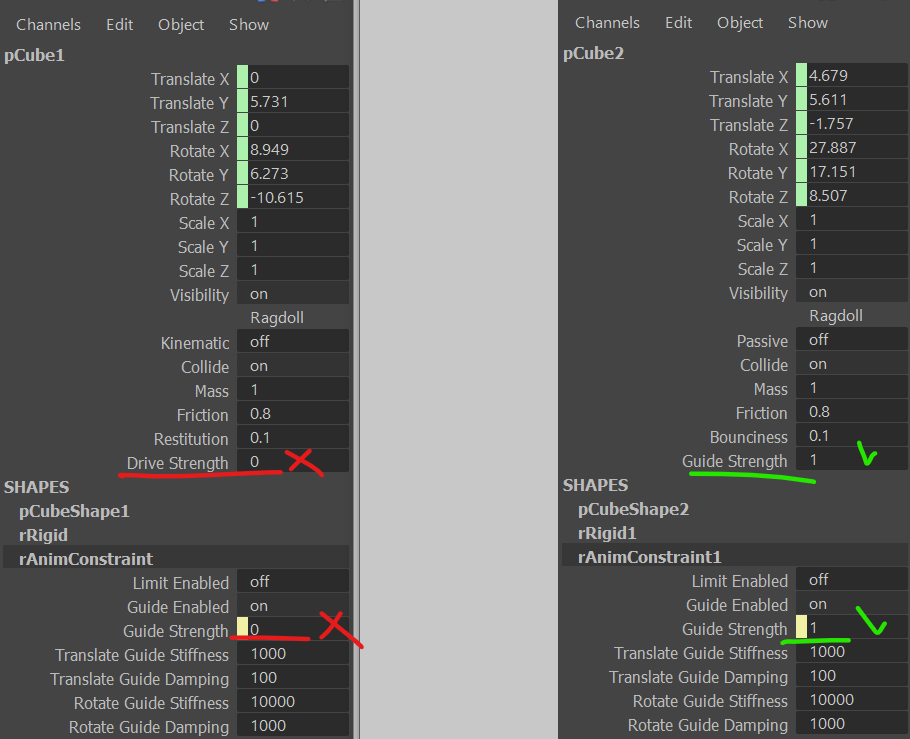 If you've ever had both passive and active rigids and let playback run on a loop, you might have encountered something like this.

Whereas if you rewound and playback without looping, everything would be allright. This bug got squashed in this release, letting you loop things to your hearts content!

Whenever you Delete All Physics anything created by Ragdoll disappears, including User Attributes. What wasn't included however was the handles that appears when you Edit Constraint Pivot and Edit Shape.

Thanks to Remi Comtois for pointing this out! 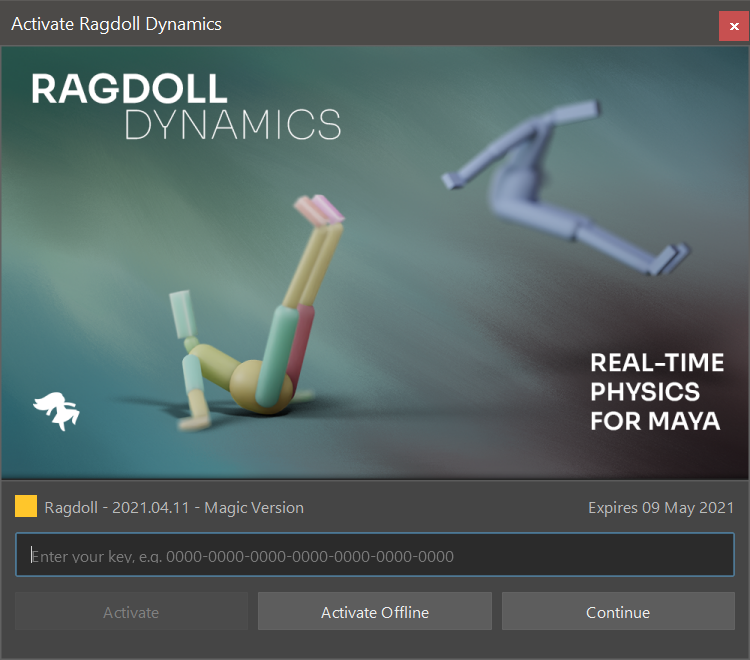 Activation is streamlined by happening inside of Maya at the paste of a serial and press of a button. Unless you are one of those without access to the internet, in which case we'll need to do a little dance. :)

Send this file to licencing@ragdolldynamics.com. We'll abrakadabra this file before you can say Taumatawhakatangi­hangakoauauotamatea­turipukakapikimaunga­horonukupokaiwhen­uakitanatahu.

Once you've got a response, activate your licence like this.

Linux users, you'll know what to do about that Windows-like path.

The last release included a callback for synchronising the Import Options UI with the Maya selection. As a result, a bug slipped in which could - in rare cases - produce the following error messages in your Script Editor whenever you changed selection.

This has now been patched up, but do shout out if this or anything like it happens to you!

Thanks to Rafael Villar for finding this bug!

Whenever you make a Guide control (now called Soft Pin) you are technically creating a constraint between a rigid and the world. That's what makes it worldspace.

Until now, constraints assumed the world didn't move. But you z-up folks out there know that, sometimes, it does! Ragdoll is now OK with that.

Thanks to Jason Snyman for finding this bug!

There was a minor bug with multipliers for any chain branching off of another chain (e.g. an arm from a spine) which caused the default multiplier to not correctly affect every link in those chains.

At the time of this release, these are the known issues that will be addressed in a future release.

If you use "controllers" in your rig, there is a possibility Ragdoll will be drawing things incorrectly.

This can be addressed by either not (1) using controllers, (2) disabling controllers in the evaluation or (3) awaiting a future update. The problem appears visual-only and should have no effect on the simulation itself.

When you hold the D key and move the pivot, there are 4 attributes being edited.

If scalePivot and scalePivotTranslate result in zero change to a nodes position (the default) then all is well. But, if you edit these independently then that will in turn affect the final position of the node, in which case Ragdoll will struggle to simulate it.

I've narrowed down a particularly annoying behavior (likely a bug) in Maya that can affect users of auto-key and Ragdoll.

This will be fixed in a future release, and if anyone knows of any workaround please let me know!

When joints do not immediately follow each other, the rotate channel isn't entirely accurate. 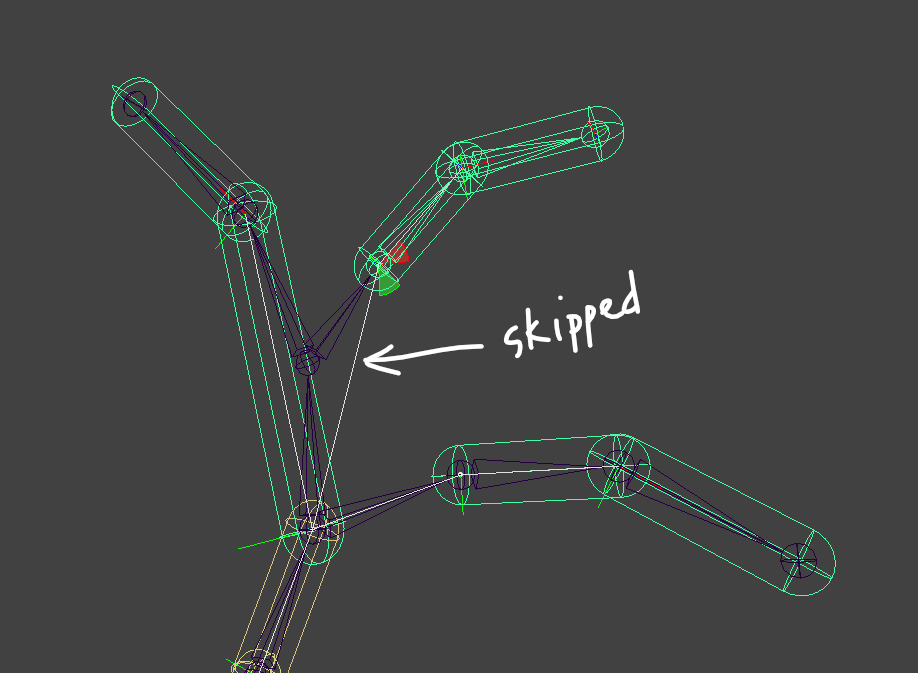 Notice how there is a joint inbetween the two rigids? Avoid this edge case for now, or zero out the jointOrient.

Guiding the translation of an Active Rigid with a Passive Rigid is currently problematic and creates an unrealistic increase of acceleration.

The current workaround is to swap solvers under the Advanced tab of the scene.