We've got a lot of new content since last release, so let's break it down. 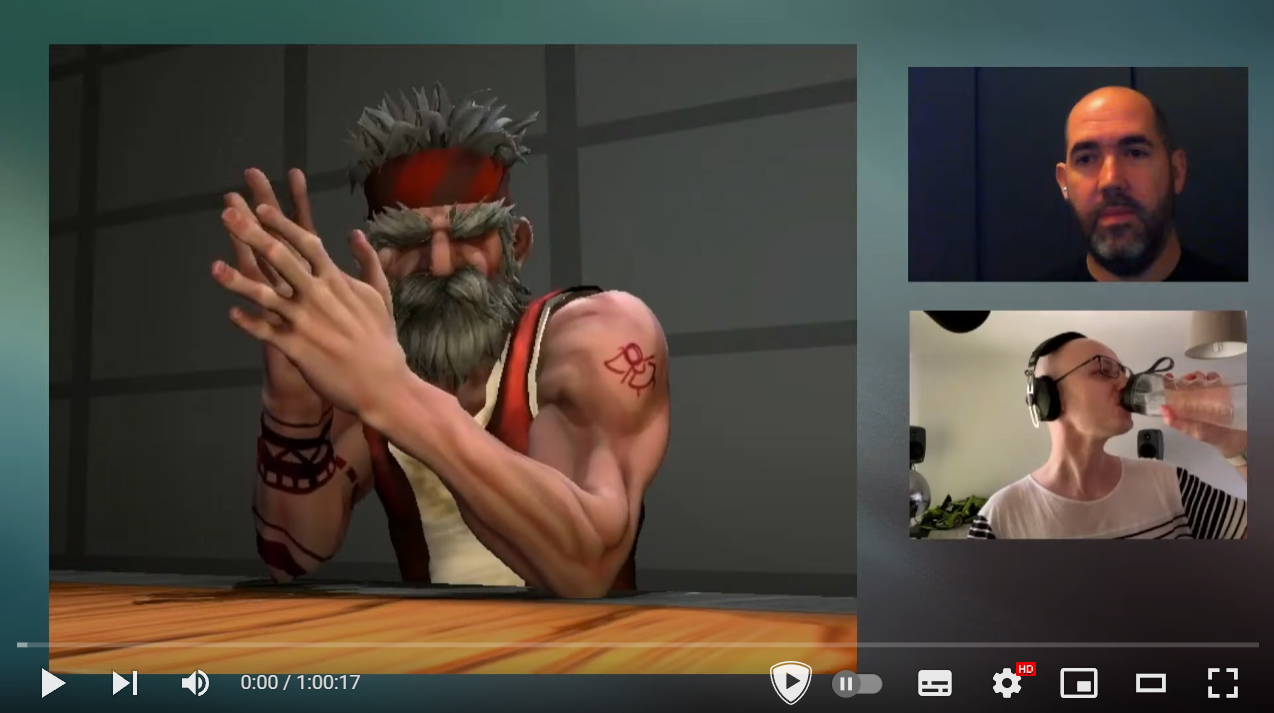 And a new start-to-finish asset and breakdown on the forums for this guy!

Another gem from @Andrei on the forums!

This one from Jack Preston on the forums!

And one more, also from Jack The Magnificent!

Jason took a spin in virtual reality to come up with this nightmare of a rabbit.

The Manikin got a friend.

You can now visually see where keyframes go upon running Record Simulation. 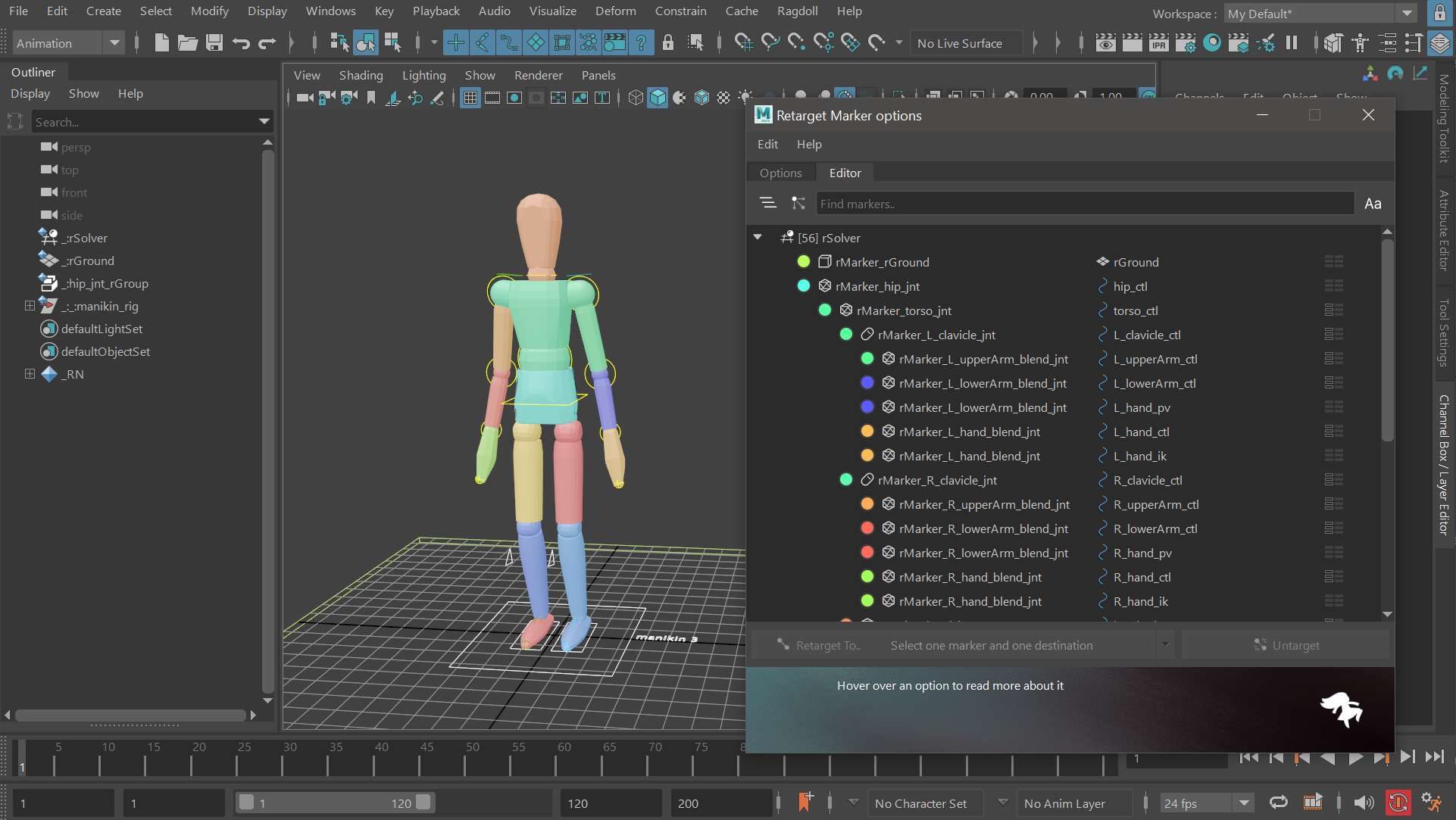 Let's take a look at what this UI is, what it can do for you and when to use it. 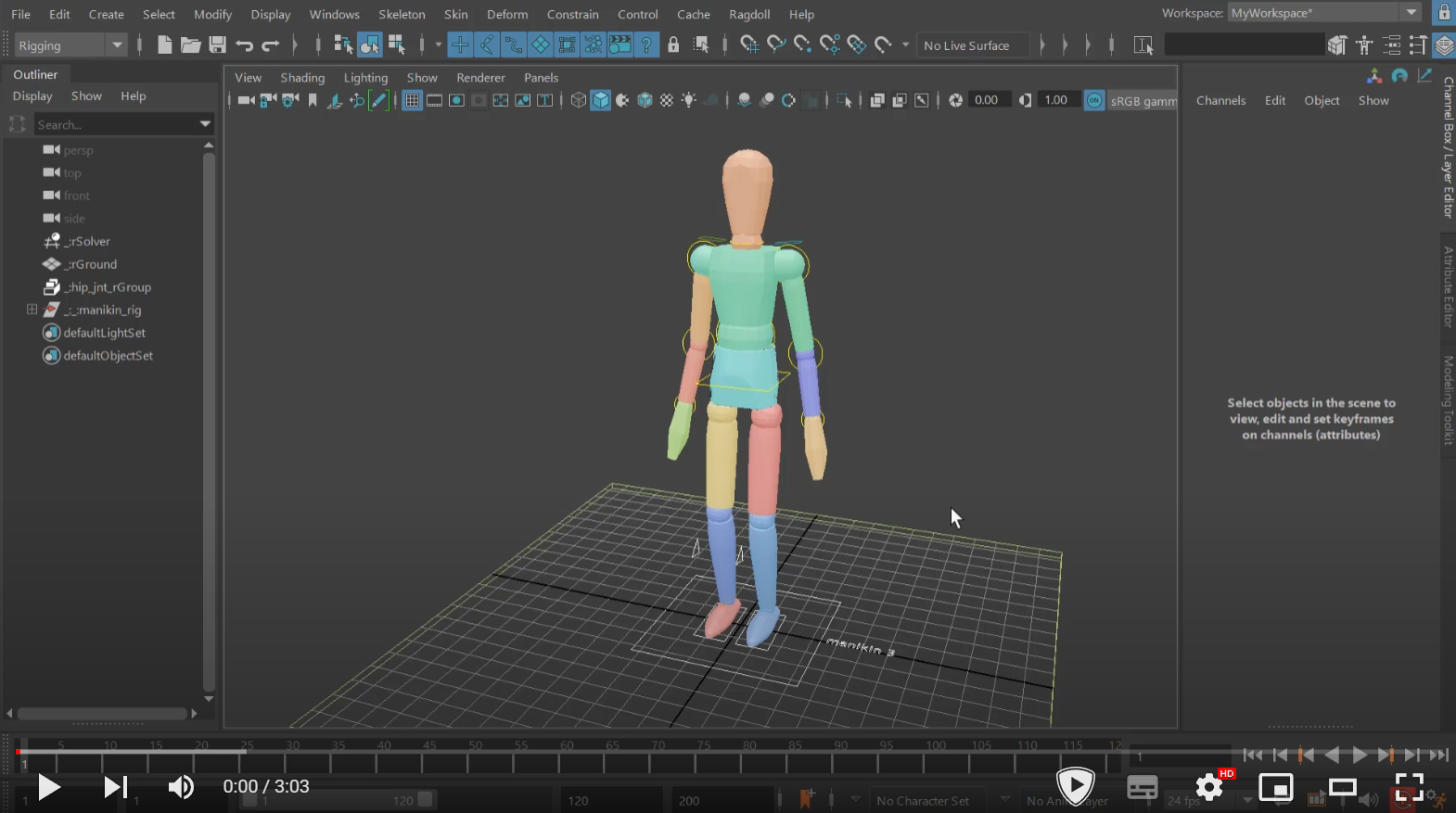 The UI can help you spot problems with recording, before recording happens. 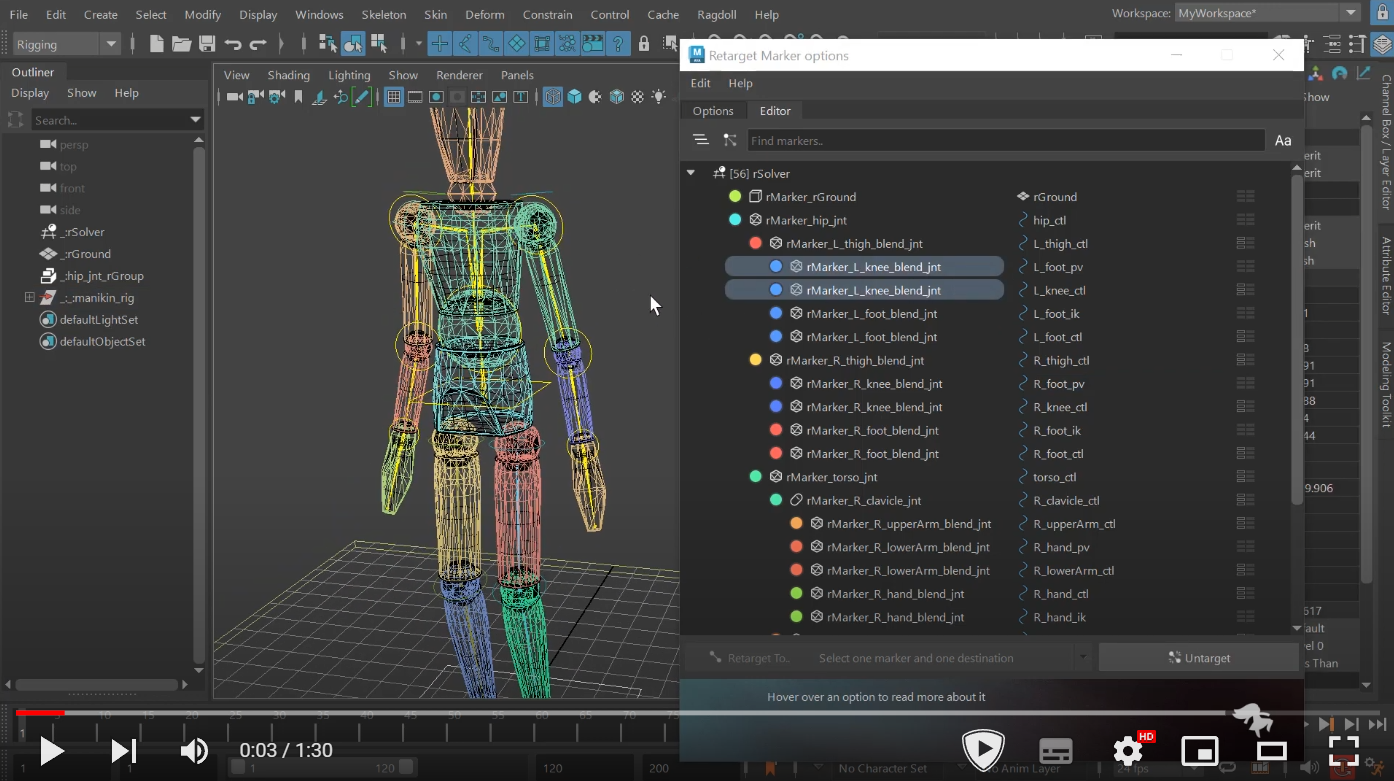 In this case, some of our markers are retargeted onto joints that are driven by some other object. If we were to attempt to record these, it's unclear what the result should be.

Neither of these are a great pick, since we don't want to break the rig, but we also want our simulation to go somewhere.

Once you've assigned your markers, grab a clean slate and gain complete control over where animation is to be recorded. 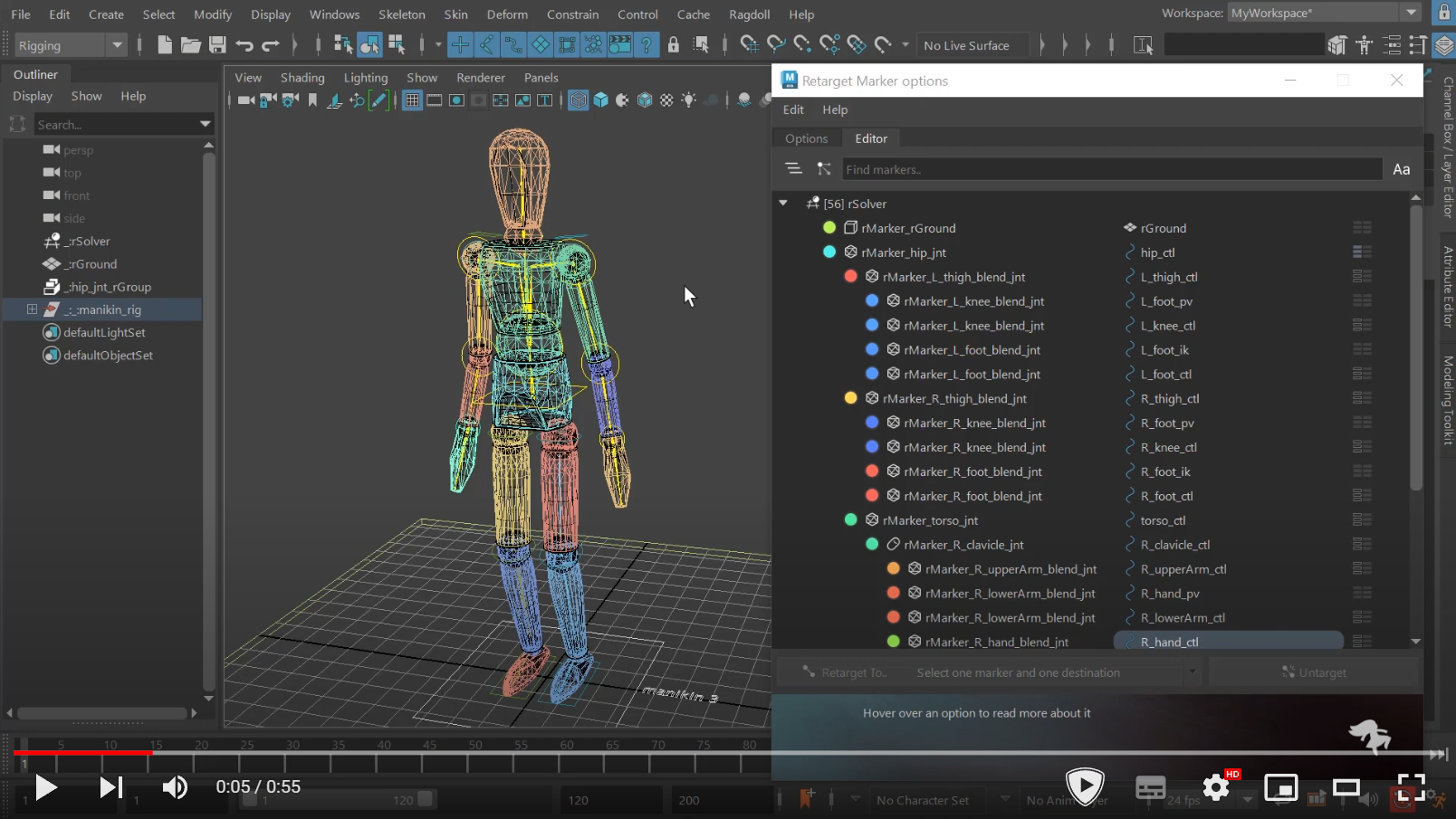 And finally, here's a longer-form example of a full setup of the Truong Dragon that we did a livestream on a while back. 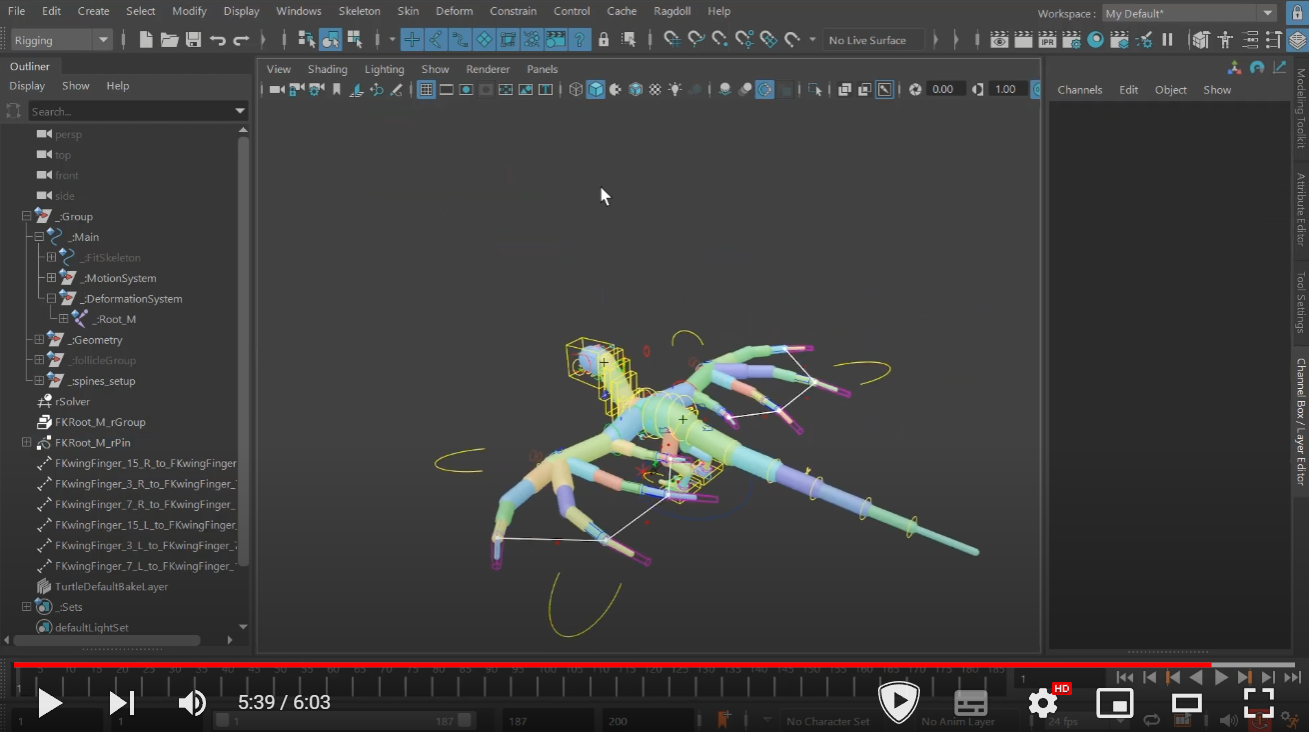 Maya 2018 is still included in this release, but should be considered deprecated and will be removed entirely by July 2022.

Ragdoll now renders up to 20% faster.

It used to be the case that each frame uploaded vertices and colors to the GPU.

But now, there is zero memory allocations. The programmers amongst you will appreciate the benefit and difficulty of such an improvement.

This lays the foundation for future performance advances, in particular related to instancing and crowd simulation. 🤫

For the techies amongst you, here's what the improvement looks like in the Profiler.

The top two layers is Ragdoll, notice the slight reduction in length. Win!

Here's a summary of changes designed to make your day just a little more bright.

You now have the option of automatically constraining the Pin Constraint to your animation, giving you a similar look to Pose Space = World except with a new dedicated transform node.

There can be many of these for the same marker!

The default, put a pin wherever the animation currently is.

Alternatively, put it wherever the simulation is.

This option can only find the simulated pose for the first 100 frames unless you've got a commercial licence, like Ragdoll Complete or Ragdoll Unlimited.

Follow your animation interactively, by putting a Parent Constraint between pin and control.

You can now select the members of a group, to aid in organising your scene.

You can now see where the environment is when the solver is offset.

The Manipulator now remembers the order in which you select, meaning you can use it for ordinary tasks like reparenting and constraining markers!

For example, consider this character here. He's symmetrical, and yet seem heavier on one side..

Let's take a closer look at the updated Hierarchy visualisation to see whether there is something wrong with the hierarchy we have created.

All from the comfort of the Manipulator.

Here are some more funky hierarchies to solidify the point.

Ragdoll will now look for symmetry right after entering the Manipulator. Especially helpful if you enter with some marker already selected, and especially if you use the T-hotkey to enter into the Manipulator!

Ragdoll will now look for a symmetrical partner when toggling the Enabled checkbox. Win!

You can now delete markers from within the Manipulator!

In the case of having more than 1 environment, you may have experienced a crash!

This has now been patched up!

Ragdoll can take meshes of any complexity.

Sometimes meshes have no volume. And that's fine; Ragdoll will generate a flat surface with some volume to it, to try and interpret what you want. However, under rare circumstances, those volume-less meshes could cause trouble for Ragdoll.

New attributes have been added to try and protect you from these. These will jiggle the vertices to try and discard anything suspicious. You normally won't have to interact with these, the defaults should keep you safe. But if you find vertices missing from your colliders, try editing these.

In some situations, you could find yourself with recorded keyframes all over the place.

Notice how all of the destination controls - the joints, in this case - are all mangled! This would happen when the current time and the start frame of the simulation did not align. Not always, but in this particular case, and likely others too!

When deleting a recorded layer, Maya would sometimes forget where your character was prior to recording.

Notice how our character remains on the ground when deleting the layer, even though that's clearly one of the simulated poses.

This is instead what we expect, for it to return to where it was prior to recording.

Solver linking is when the contents of two or more solvers participate in the same physical world; for example, reference two characters and link their solvers. Viola, you've got a single simulation with the two characters interacting with each other. Great!

However, under some circumstances this didn't always work. Especially with referenced files. It had to do with the order in which the solvers were created, and which solver was created when. It could happen that the link was ignored. Sometimes it behaved differently on scene re-open.

No longer! Now solver linking is robust, as you would expect.

Using the manipulator in a Maya configured for inches, or any other unit than millimeters..

..could result in funky behaviour. This has now been fixed!