Highlight for this release is Quality of Life!

Let's catch up on a few highlights over the past 2 weeks.

Andrei got Ragdoll introduced to this beautiful thing. 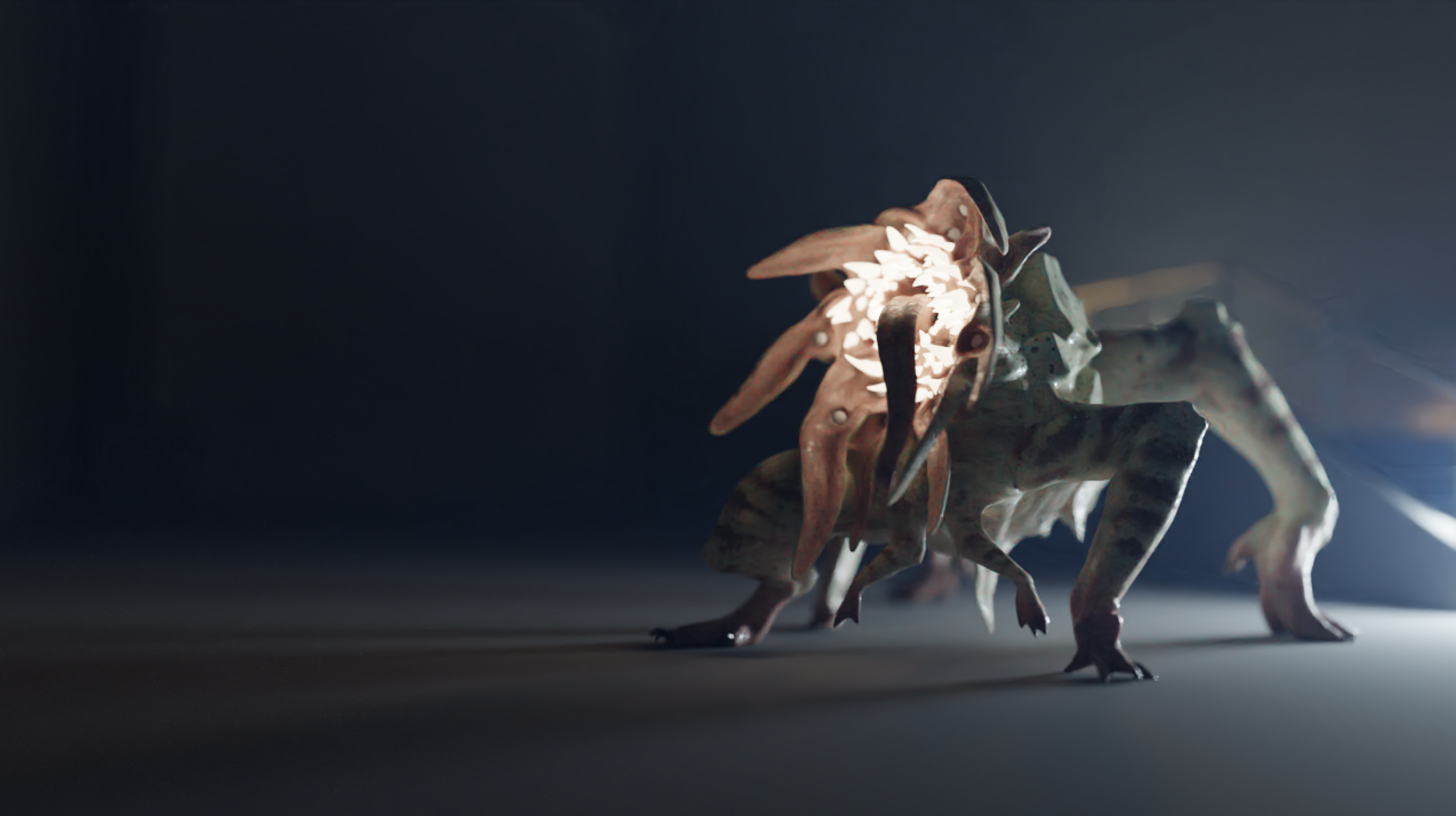 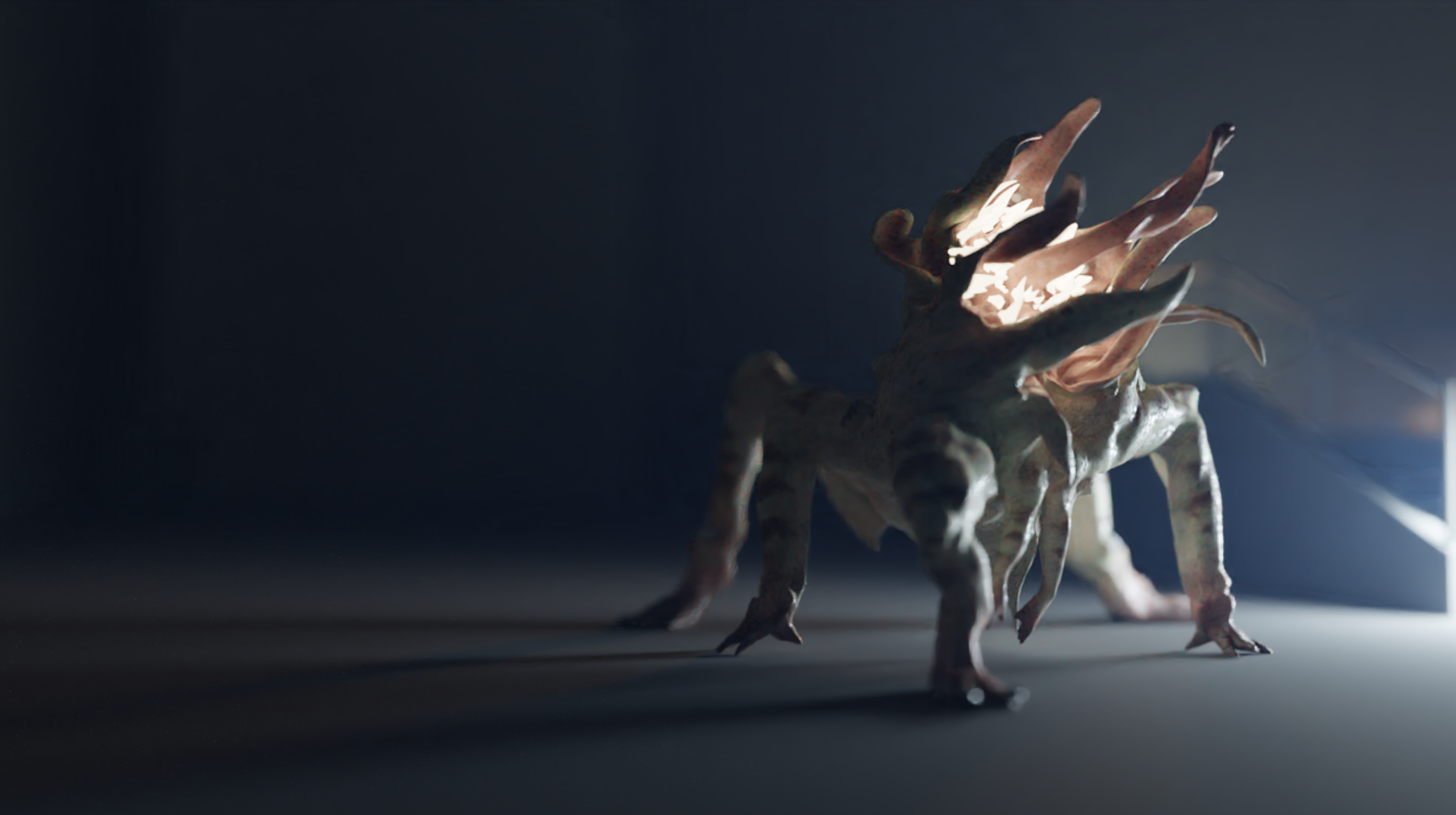 Jason's working on a new tutorial for how to make self-walking quadrupeds.

The Manipulator operates on 1 solver at a time.

When there are two or more manipulator in the scene, Ragdoll will now be more kind and smart about which one you mean.

..and the manipulator will figure out which solver you mean.

When unsure, it will ask you to clarify.

Each marker have 3 possible nodes you can select.

Selecting the marker and source transforms gave you a handy selection highlighting in the viewport, confirming what you had selected. But so far, selecting a destination transform did no such thing. Until now!

Notice how this also helps you detect whether something has a target at all, like the upper legs here. These remain unrecorded, as they are connected to the hip and driven by IK.

You can now visualise when and where contacts occur.

This can help spot self-collisions too!

Symmetry is now preserved on import.

For any character authored in a symmetrical pose, the Ragdoll Manipulator would let you operate on this character on both sides at once.

But until now, this symmetry was lost if at any point an import was made on a character was not symmetrical, such as an animated character.

With nothing selected, you now have access to the Solver in the Channel Box.

Almost rhymes. If recording takes too long and you hit the ESC key to cancel, Ragdoll no longer leaves a mess behind. It's clean!

The manipulator now colors limits by their axis. Where X is red, Y is green and Z is blue; just as you'd expect.

There is now an option to disable auto cache upon completed record. 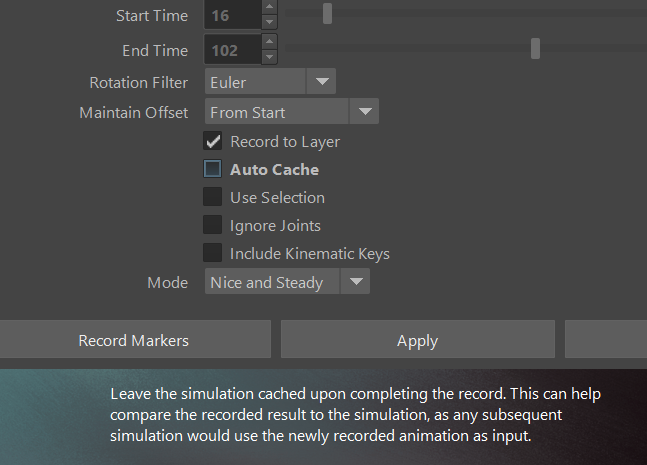 This will let the simulation continue running after recording, using your newly recorded controls as input.

Limits are now only visible when selected, making things a little less messy in the viewport.

Some house cleaning of minor things that could sometimes trip you up.

Ragdoll is now happy to import physics onto any number of namespaces.

The previous release broke any transition between Local and World, this has now been fixed.

When you want a marker to follow your animation in worldspace in all but one or two axes, you can use World Pose Translation. However, in the previous release, the axes were aligned with the control rather than the world. This has now been fixed.

Linking two solvers is a non-destructive method of getting multiple characters to interact in the same scene. As it happens, you haven't been able to unlink until now.

As it happens, the Import Options will only show you files that have a .rag extension. But! The Export Options would permit export of files without this extension.

As a result, it could appear as though nothing was exported. :( 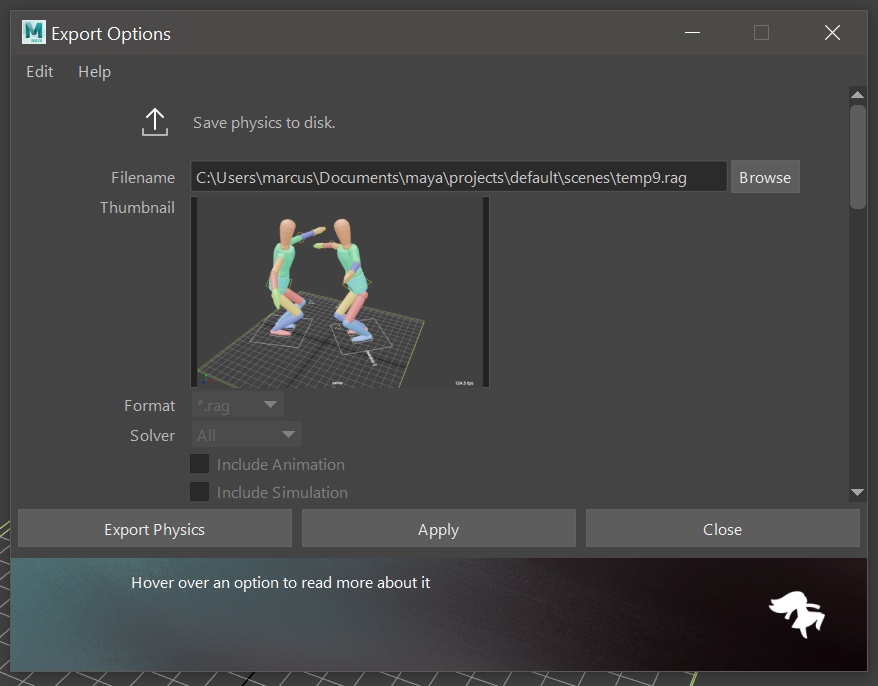 To keep gimbal locks from happening in your recorded simulation, an "Euler Filter" could be automatically applied. This hasn't been the case so far, but has now been fixed.

Giving markers a density of 0 would make it infinitely light, or infinitely heavy depending on your perspective. Such things does not exist in the real world and cannot be simulated.

Ragdoll will now protect you against this.