The terminology for "Rigid" and "Collider" wasn't clear. Surely, a "Rigid" collides too?

With this release, I've updated the jargon to make a little more sense.

This also goes for the kinematic attribute which has been renamed passive, highlighting that an active rigid can made passive by flicking this switch. Backwards compatibility is preserved by keeping the underlying attribute name, and only changing it in the Channel Box and Attribute Editor (i.e. the "nice name"). 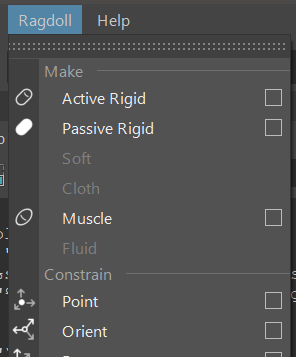 This release expands on the "Character" tool with some nifty new features. But since I haven't mentioned what 1.0 was capable of, here's an overall round down of what it is and when to use it.

Character is a one-click character creation tool - and auto-rigger (or auto-ragger, if you will). It's designed to give you the essential tools for turning any native Maya skeleton into an animatable rigid body hierarchy.

Read more about it on this new dedicated page I've made for it.

Now Dynamic Control can be configured to generate capsules between selected controls, instead of assuming that the NURBS CVs neatly wrap around the model.

The tool uses the Mesh shape per default like before.

But if your controls do not have volume, or do not nicely wrap the underlying model, you can now use Capsules instead.

In this example, 5 nodes selected, 1 passive and 3 active rigids comes out. If you don't use a last selection for length, the last selected capsule will have a length of 0 (it'll be a sphere). That can work in some cases, but is generally discouraged. The center of mass would be wrong and you should expect unrealistic results until you tweak it to fit your model.

Gathering information about Dynamic Control on the..

An early version of the "Normalise Sizes" tool, meant to more evenly distribute sizes of shapes across a hierarchy. Per default, shapes are sized based on the geometry of the Maya node. If it's a box, it'll get the dimensions of the box. If it's a joint, it'll get the length and radius of that joint.

But because this mechanism can't see past the one node it's looking at, it's an uphill battle making shapes evenly distributed in a greater network.

The "Normalise Sizes" tool is meant to address that.

It's still early, and a few things are missing.

Now you can speed up or slow down your simulation with a multiplier attribute found on the rdScene node!

Thanks to Peter Jemstedt for help on this one!

Shapes and constraints can now be automatically oriented based on the parent and child of each joint (soon coming to controls). This should help sort out those pesky joint orientations any manner of skeletons.

There was this nasty bug that caused rdRigid nodes to remain behind after creating and then undoing. But what got left behind wasn't your normal nodes. They only appeared in the Node Editor and could not be selected or even deleted. They would show themselves out when re-opening the Maya scene which is great.

This visibility isn't a problem in itself, if it wasn't for them also being visible from Python. If any command needed to know "hey, animation control, are you connected to a rigid?" then it would happily reply "yes! for sure!".

And that's bad. But not anymore, because it's fixed!

In a previous release I touched on "angular mass" and what it meant for your simulations.

Let's look at this in practice.

Here's one character with identical settings, the only difference is the radius of her capsules, and yet the move differently. Why is that?

Remember that angular mass is 3-dimensional. Just like normal mass, when mass is high, more force is required to introduce motion. In the case of angular mass, the force required is divided into three axes. 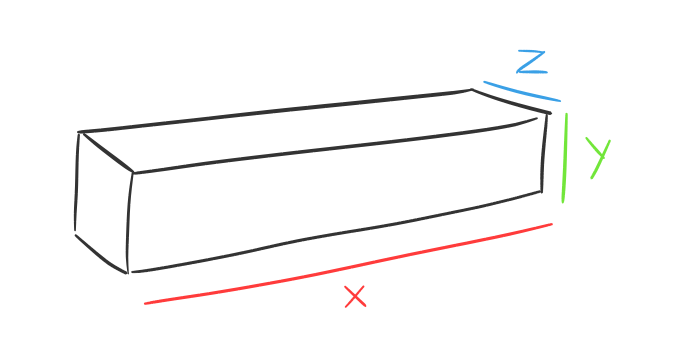 In this illustration, the angular mass along the X axis is much larger than Y and Z, so in to rotate around this axis you need much more force than the other two axes.

There is however only 1 value for "guide strength". You can think of this force as being distributed across each axis, relative its mass.

Whereas if angularMassX was equal like a square cube.. 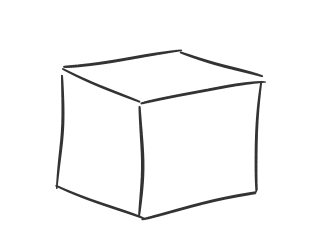 In light of this, what are your options?

Here's the scene and one more gif to keep you warm at night.

Some things to experiment with:

Stumbled upon this (thanks Jarl!) which I think is a great example of what I think we're ready to move away from as an industry. :)

Here's a prediction for you - about a year from now, you won't be keyframing anymore. You'll be recording.